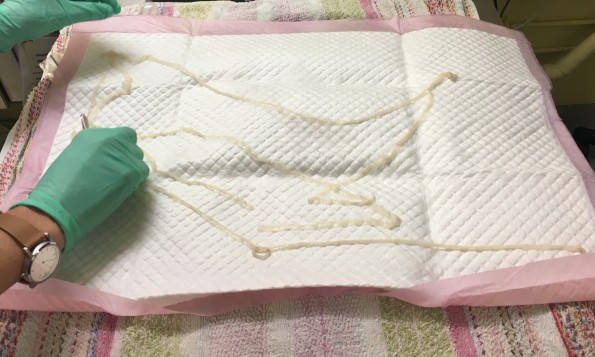 What are tapeworms and roundworms?

Tapeworms and roundworms are two of the most common intestinal parasites of cats. Tapeworms are long flat worms composed of many individual segments whereas round worms are much shorter and have rounded bodies.

Roundworms produce microscopic eggs which are shed in the faeces of infected cats, whereas tapeworms release mature segments (which again contain eggs) from the end of the worm into the faeces. These segments sometimes look like grains of rice and are mobile. They can occasionally be seen on the hair around the anus of the cat or in the faeces.

How can my cat get roundworms?

Roundworms are very common, particularly in young cats and kittens. The two most common species found are Toxocara cati and Toxascaris leonina. With both of these worms, eggs passed in the faeces can be ingested (eaten) by another cat leading to transmission of infection. In addition, the eggs may be eaten by another animal (‘intermediate host’) such as a small rodent (for example a mouse or rat), and a cat can be infected by preying on (eating) the infected intermediate host. For Toxocara cati there is another important route of transmission to kittens, which is through the milk of the queen (mother). From earlier infections with roundworms, a queen will have some larvae remaining dormant in certain tissues in the body and when she gives birth to a litter of kittens these larvae migrate to the mammary glands and are excreted in the milk. This process causes no harm to the queen, but means that kittens are very commonly infected with roundworms from a very young age. Roundworm infections are extremely common, and it is safe to assume that all kittens will be infected.

How can my cat get tapeworms?

There are a variety of different tapeworms that can infect cats, but the two most common are Dipylidium caninum and Taenia taeniaformis. The eggs of Dipylidium shed within the tapeworm segments in the faeces are eaten by flea larvae, and then other cats become infected with this tapeworm by ingestion (eating) an infected flea during grooming. As flea infections are so common in cats, this tapeworm is also common and it should be assumed that any cat with fleas will also have Dipylidium infection.

In contrast, the eggs of Taenia taeniaformis are eaten by rodents (rats and mice) so other cats become infected during hunting by eating an infected rodent. Infection with this worm is less common therefore, but should be expected in any cat that actively hunts.

Can these worms infect humans?

It is possible for humans to be infected with both Toxocara cati and Dipylidium caninum, the latter is very rare however, as it requires ingestion (eating) of an infected flea. Toxocara cati is more of a concern, particularly in children, where ingestion of the eggs may result in migration of the worm larvae through the body and potential damage. This is much more of a risk with the dog roundworm (Toxocara canis) but can still occur occasionally with Toxocara cati.

Due to the potential human health hazard, as well as the possible ill-health to the cat, regular worming of cats is important. In addition, careful disposal of litter from litter trays is important, and ideally the tray should be disinfected daily with boiling water.

“Due to the potential human health hazard, as well as the possible ill-health to the cat, regular worming of cats is important.”
What should I use to worm my cat, and how frequently?

A variety of products are available to treat roundworms and tapeworms in cats but they are not all equally effective. For the best advice on the type of worming preparation most suitable for your cat, you should seek the help of your veterinary surgeon. The most effective worming products are only available from a vet.

As kittens can be infected with roundworms from a very young age it is important that worming is started early and repeated regularly. Tapeworms are more likely to be a problem in adult cats and at this age less frequent but still regular worming is required.

A suitable protocol for worming cats of all ages is:-

Treat every two weeks with a product active against roundworms.

Treat every two to six months with a product active against both roundworms and tapeworms.

The precise frequency of treatment will depend on likely exposure to tapeworms in particular (for example whether fleas are present and whether the cat hunts). For cats that are difficult to administer tablets there are now other worming preparations such as ‘spot-ons’, injections, granules, pastes and liquids. Ask your vet for further information about these products.

© Copyright 2015 LifeLearn Inc. Used and/or modified with permission under license.

We offer a wide range of services including medical, diagnostic, surgical, wellness and preventive health care services for your pets so they live longer, healthier lives.

Meet the caring and compassionate staff of Greenway Drive Vet. Our experts are dedicated to the health and wellbeing of your pet.

We're committed to providing you the latest pet health information. Our educational resources are available to help you understand your pet’s healthcare needs.